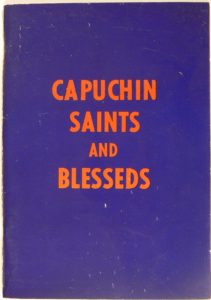 In 1981, while a missionary in Zambia, I compiled a booklet called Capuchin Saints and Blesseds, which was published in 1983.

It contained short biographies of the twenty friars whom the church then recognized by those titles. Happily, today their number is much greater – it is ninety-one. This is due principally to the arrival on the canon of saints of the Capuchin martyrs of the French Revolution, the Spanish Civil War, and the Nazi occupation of Poland during World War II. In addition, I am happy to be able to include here the Capuchinesses, about whom I had access to no information when in Zambia. And there are others also.

They are a mixed bag of humanity, with the strengths and weaknesses, vices and virtues, to which all people are prone. The late Capuchin Cuthbert McCann of Belfast (died 1991) wisely said, ‘The saints were not canonized because they were perfect – “All have sinned and fall short of the glory of God” (Romans 3.23) – but because they offer hope to us who are even more imperfect than they.’ Some would have been wonderful people to live with, some difficult. None would have described themselves as “successful” but they were faithful.

In any event, their lives and deaths were the work of God’s grace without which none of us is anything. To God be the glory for ever and ever. Amen.

You can read or download a PDF of the text of Capuchin Saints and Blesseds here.